Over 250 members and guests gathered Friday to help celebrate the past year’s accomplishments and install new officers the Marshall FFA Chapter. This is a group of young adults that has achieved so much individually as well as a team. They were selected as the number one Chapter in Missouri and received gold emblem recognition putting them in the top ten chapters in the Nation. Over 13-thousand dollars in scholarships and cash awards were handed out as well. They also have bragging rights when it comes to moving up in the ranks. Last years President Abrea Mizer has also been named State FFA President. She is the third State President to come from this Chapter.

Congratulations to all the winners! 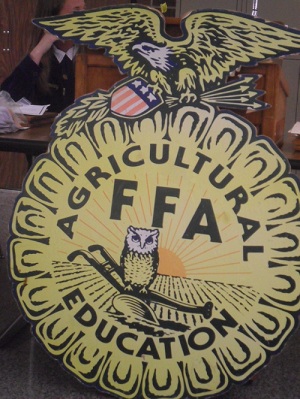 The following teams not only competed at the district level but also qualified for state competition.

3rd place, Group I at Districts

3rd place, Group I at Districts

Evan Summers – Evan was 7th high individual at state and received a group I rating.

7th place, Group I at Districts

7th place, Group I at Districts

6th place, Group I at Districts

The Agricultural Proficiency Awards honor FFA members who, through their SAEs, have developed specialized skills that they can apply toward their future careers.

Students can compete for awards in 41 areas covering everything from Agricultural Communications to Wildlife Management.  Each award area has two categories, placement and entrepreneurship.

Jessica Browning – Jessica received 1st place at Area and was recognized on stage at state!

Kayla Elson – Kayla received 1st place at area and was recognized on stage at state!

Kameron Godsey – Kameron received 1st place at Area and was recognized on stage at state!

This year the Trap Team Competed at Three Levels of Competition:

2  Marshall Squads Competed against 31 Teams in the Area

The Marshall Squad Placed 4th in a field of 50 squads

Tyler Wells (A perfect Round of 25 straight)

Bryce Breshears earned 5th High Individual with a score of 95.

Bryce Breshears (Perfect Round of 25 straight)

Tyler Wells (Perfect Round of 25 straight)

The beginning SAE Awards go to the first year boy and girl with the most outstanding SAE Project.  This award is sponsored by Beta Phi Chapter of Beta Sigma Phi.  They provide the winners with a $50 award.

Each year the Marshall FFA Chapter recognizes the top three individuals from each grade level that earned the most FFA Activity Points.  The first place individual will receive $40 cash prize, 2nd = $30, and 3rd = $20.

The Star Greenhand award is presented to the outstanding freshman member.    The 2013 recipient is Jessica Beasly

The Star Chapter Farmer is presented to the outstanding chapter degree member that has an ownership SAE Project.  The 2013 recipient is Kayla Elson.

FFA Member of the year:

The 3rd highest degree a member can earn is the State FFA Degree.  This year, Marshall FFA was proud to have five members walk across the stage at State FFA convention to receive this degree.

Marshall FFA Chapter recognizes 46  members that maintain an A all four quarters with a Scholarship medal.

The Marshall FFA chapter has received several recognitions this past year.  In August we found out that we were not only the #1 chapter in Missouri, but were also named a finalist in Models of Excellence.  This means that Marshall FFA is one of the top 10 chapters in the nation!  What an accomplishment!

On Thursday, April 18, at the State FFA Convention, the Marshall FFA Chapter was once again recognized as a gold emblem chapter.  For the second year in a row we reached a long standing goal of being named the number 1 chapter in the entire state of Missouri.  Congratulations to all of our members for this achievement! In the words of Mr. Lark – “back to back, baby!” 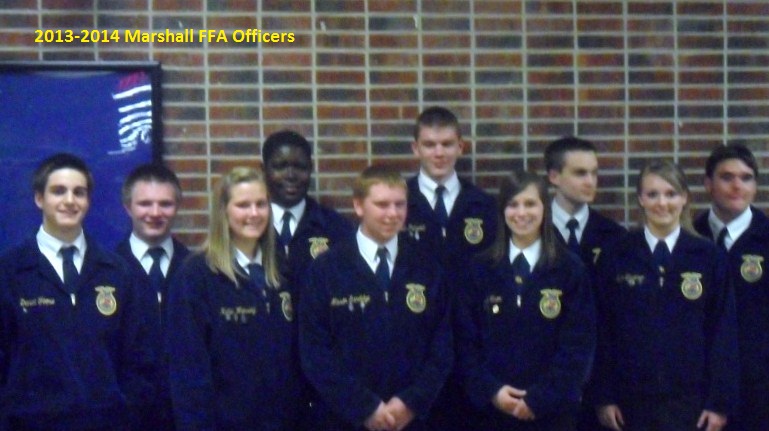 Crash in Boone County leaves one in hospital 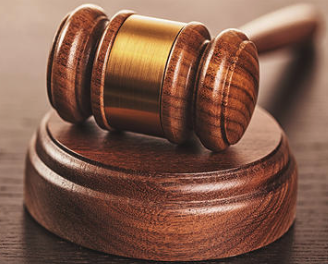