Thunderstorms are dangerous because they include lightning, high winds, and heavy rain that can cause flash floods.  Remember, it is a severe thunderstorm that produces a tornado.

By definition, a thunderstorm is a rain shower that contains lightning. A typical storm is usually 15 miles in diameter lasting an average of 30 to 60 minutes. Every thunderstorm produces lightning, which usually kills more people each year than tornadoes.

A severe thunderstorm is a thunderstorm that contains large hail, 1 inch in diameter or larger, damaging straight-line winds of 58 mph or greater (50 nautical mph), and/or a tornado.

Rain cooled air (straight-line wind) descending from severe thunderstorms can move at speeds in excess of 100 mph. There were 13 injuries from thunderstorm wind gusts in Missouri in 2013.

A downburst is a sudden out-rush of this wind. Strong downbursts can produce extensive damage which is often similar to damage produced by a small tornado.
A downburst can easily overturn a mobile home, tear roofs off houses and topple trees. Severe thunderstorms can produce hail the size of a quarter (1inch) or larger.

Quarter-size hail can cause significant damage to cars, roofs, and can break windows.

Softball-size hail can fall at speeds faster than 100 mph.

Avoid traveling in a severe thunderstorm – either pull over or delay your travel plans.

When a severe thunderstorm threatens, follow the same safety rules you do if a tornado threatens. Go to a basement if available. If not, go to the lowest level of the building and move to a small interior room or hallway.

Stay away from doors and windows. If time permits move your vehicles into garages or carports to help prevent hail damage.

Missouri has 1 death and 2 injuries from lightning strikes in 2013. At any given moment, there are 1,800 thunderstorms in progress somewhere on Earth. This amounts to 16 million storms a year! In the United States, there are an estimated 25 million cloud-to-ground lightning flashes each year. While lightning can be fascinating to watch, it is also extremely dangerous.

According to statistics kept by the National Weather Service, the 30 year average for lightning fatalities across the country is 73. Lightning usually claims only one or two victims at a time, and because lightning does not cause mass destruction, such as from a tornado event or a hurricane, lightning generally receives much less attention than the more destructive storm-related events. Due to under reporting, it is estimated that, more realistically, about 100 – 120 deaths per year occur because of lightning. Documented lightning injuries in the United States average 300 per year; however undocumented lightning injuries are likely much higher. 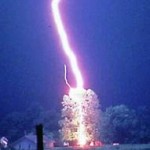 Remember, lightning can strike up to 10 miles from the rain area. Go quickly inside a completely enclosed building before the storm arrives. A hard topped all metal-vehicle   provides good protection. If no shelter is available, do not take shelter under a tree. If only isolated trees are nearby, crouch down on the balls of your feet in the open, keeping twice as far away from a tree as it is tall.

Get out of the water, off the beach, and out of small boats or canoes. Avoid standing in puddles of water even if wearing rubber boots.

Do not use metal objects such as golf clubs, metal bats, fishing rods, or metal tools.

Get off of heavy metal equipment such as tractors or construction equipment.

Stay there! The best protection from lightning is a house or other substantial building. However, stay away from windows, doors, and metal pipes.

Do not use electric appliances during the storm. Turn off sensitive equipment such as televisions, VCR’s, and computers.

Telephone use is the leading cause of indoor lightning injuries in the United States.

Do not make a call unless it is an emergency