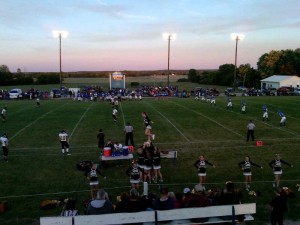 Southwest kicks off to Norborne after their first of many touchdowns on the night.

The Pirates came into Friday night’s contest banged up with injuries at key positions and a 1-2 record. The Wildcats were 2-1 following their first loss of the season a week earlier to Hardin-Central.

Norborne took the opening kick-off and ran into a stout defense from Southwest, who forced Norborne into a three and out. Southwest returned the punt to their 36 yard line. On the first play from scrimmage Ethan Crowe scrambled for a 44 yard touchdown with 10:14 left in the first. That was the beginning of a landslide that Norborne could not stop or even slow down.

Crowe would rush for four touchdowns on the night. The longest was a 66 yard scramble near the end of the first half.

Lake Crowe would rush for three touchdowns including a fourth touchdown by way of a 75 yard kick-off return to open the second half. At the end of the first half Southwest was untouchable leading 78-0.

Also contributing to the route of the Pirates was Mason Palmer who broke free with 2:50 left in the first quarter for a 69 yard run to the house. Palmer would also tack on a 44 yard touchdown before the night was over.

The only passing touchdown for the Wildcats was a 46 yard strike from Ethan to Lake Crowe to put Southwest up 54-0 with 7:18 left in the first half.

Norborne never quit despite being out of the contest after the first five minutes of the game. Outmatched and out muscled the Pirates would continue to go to the line and grind out every play, but the Wildcats proved too much for Norborne.

The Pirates will regroup at 1-3 and get ready for another road trip next week, this time to Union Star.

The Wildcats improve to 3-1 and will host Chilhowee and Leeton next Friday.