SAN FRANCISCO (AP) — The St. Louis Rams and San Francisco 49ers played the NFL’s first tie game in four years with a 24-24 final yesterday. Greg Zuerlein kicked a 53-yarder, but the Rams were penalized 5 yards for delay of game. He tried again and missed wide right with 2:42 left in OT. San Francisco’s David Akers missed wide left on a 41-yard attempt that could have sealed it for the NFC West-leading 49ers.

PITTSBURGH (AP) — In a season during which very little has gone right for the Kansas City Chiefs, running back Jamaal Charles is the exception. A year removed from a knee injury, Charles is ninth in the NFL in rushing. He is perhaps the only reliable weapon the struggling Chiefs have on offense heading into tonight’s game against surging Pittsburgh.

(Pittsburgh, PA)  —  The Chiefs have placed defensive tackle Glenn Dorsey on injured reserve.  He injured a calf muscle in last week’s game against San Diego.  He missed four games earlier this year because of the injury.  Defensive back Neiko Thorpe is being promoted from the practice squad.

NEW YORK (AP) — Kansas State and Oregon are now on course to play for the BCS national championship. After Alabama was upset by Texas A&M, the new BCS standings have the Wildcats first and the Ducks second. Notre Dame is third, not too far behind, but most likely in need of a loss by Oregon or Kansas State to reach the title game on January 7th in Miami. 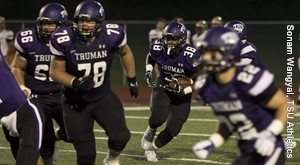