ST. LOUIS (AP) — Adam Wainwright carried a no-hitter into the eighth inning in a 3-0 Cardinals victory over the Colorado Rockies yesterday. The Rockies had been hitless in 49 consecutive at-bats before Nolan Arenado lined a hit to center field. The 49 at-bats is the longest hitless stretch since a 50 at-bat streak against the Los Angeles Dodgers in 1981. The cards will go for the sweep with Jaime Garcia on the mound against the Rockies’ Jorge De La Rosa; first pitch at 1:15 p.m.

KANSAS CITY, Mo. (AP) — Vernon Wells made a long running catch to preserve a 3-2 victory for Andy Pettitte and the New York Yankees over the Kansas City Royals last night. The left-hander gave up five hits, struck out seven and improved to 15-3 in his career against the Royals. Kansas City hasn’t beaten Pettitte in 14 starts dating to 2000. The Royals will try to avoid the sweep with Ervin Santana on the mound against the Yankees’ Hiroki Kuroda on the hill; first pitch at 1:10 p.m.

KANSAS CITY, Mo. (AP) — Mariano Rivera spoke with more than a dozen members of the Kansas City community before last night’s game against the Royals. The Yankees closer is meeting with fans and employees in each city the team visits before he retires at the end of the season. Rivera posed for pictures and gave attendees signed baseballs.

ST. LOUIS (AP) — The Blues finished with four straight losses to the Los Angeles Kings for their second straight playoffs. St. Louis lost 2-1 in Game 6 Friday night. T.J. Oshie was minus-3 in a game that included his first two career playoff goals. Patrik Berglund had one goal, and David Perron had none.

DARLINGTON, S.C. (AP) — Matt Kenseth passed Joe Gibbs Racing teammate Kyle Busch with 13 laps to go to earn his first Southern 500 victory at Darlington Raceway, finishing ahead of Denny Hamlin. Busch had the strongest car for much of the race and led for 265 of the 367 laps before fading to sixth. Jeff Gordon finished third in his 700th consecutive career start. 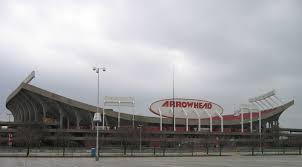 MoDOT Is Ready for Winter Weather