PRESS RELEASE: (Missouri Department of Conservation) — Hybrid striped bass stocked by the Missouri Department of Conservation (MDC) at some northwest Missouri lakes are reaching a catch-and-keep size, if an angler can reel them in. Hybrids, a cross between white bass and striped bass, are one of the strongest fish swimming in Missouri waters. Most are small now, but they can in time reach a trophy size of 15 to 20 pounds. A six-year stocking program at smaller lakes is complete and will let biologists watch to see if the hybrids can reduce an overpopulation of gizzard shad and boost other sportfish populations. 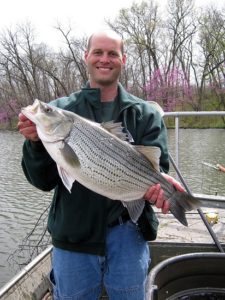 “We’re seeing some 25-inch hybrids,” said Tory Mason, MDC fisheries management biologist. “There definitely should be some drag screamers out there,” he said of a big fish peeling line off a fishing reel.

The hybrids were stocked at Belcher Branch Lake southeast of St. Joseph, Willow Brook Lake near Maysville, Nodaway County Lake north of Maryville, Limpp Lake near King City, Hamilton City Lake, Watkins Mill Lake at Watkins Mill State Park near Excelsior Springs, and Little Compton Lake southeast of Hale in Carroll County. Anglers can keep up to four hybrids, but they must be at least 20 inches in length.

Stocking the hybrid striped bass in the smaller lakes with too many gizzard shad is an experiment. Gizzard shad are a food fish for sport fish like bass, crappie, and catfish when they are young of the year. But they quickly grow to a size too large for most sport fish to eat. The hybrids stocked were reared at MDC’s Lost Valley and Blind Pony fish hatcheries.

“We want to see what kind of reduction in gizzard shad we can get,” Mason said. “In a small reservoir, they become too numerous and grow too fast for anything to eat, except the big largemouth bass. Shad also compete for plankton with young bluegill and crappie fry, and they lower the growth potential for crappie and bluegill.”

Biologists expect the experimental hybrid striped bass stocking to take several years to produce changes in gizzard shad and sport fish populations. But preliminary observations show fewer young gizzard shad, a possible desirable population reduction. Some eight-inch bluegill, a large size for that species, have turned up in some surveys. The largemouth bass population does not seem to be affected. Biologists don’t know yet how crappie populations are being affected.

“It’s not uncommon now to see anglers out there trolling and catching these hybrids for fun,” Mason said. “They are one of the most fun fish to catch, the way they strike a lure and make a drag scream.”

Hybrids generally swim in a lake’s more open water. Anglers use crankbaits or lipless crankbaits that mimic shad or other small fish to catch them. Mason recommends anglers use 8- to 10-pound test braided fishing line. Hybrids fight hard when hooked, and they have razor sharp gill plates that can cut line.

“They’re just a blast to catch,” he said.

Anglers are urged to use care in releasing hybrids that are beneath the 20-inch length limit. Mason suggests reeling them in alongside the boat and using a pair of pliers to twist the hook to unhook the fish without removing it from the water. Anglers should keep their hands away from the sharp gill plates.

A Day at the Sale Barn

Get Buzzing About Bees