The Spartans Defeat the Minutemen at Richmond 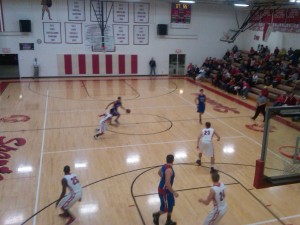 The Richmond Spartans hosted the Lexington Minutemen Friday night for a varsity contest between two teams on opposite sides of the spectrum. Richmond was sitting at 15-6 coming into the contest against a fairly young Lexington team at 4-16.

The opening tip-off went to the Minutemen with a quick score at the right post by Client Fergason to put Lexington up by two. However Richmond’s Reid Summers dropped a three pointer from over 20 feet out and the Spartans would take a 3-2 lead and never look back.

The Minutemen put up a good fight in the first period trailing by as little as two but found themselves down 12-8 at the end of one.

In the second period Lexington would continue to put up points to keep pace with the Spartans, but as the clock ticked closer to the half the Spartans were Able to steal the ball on misplaced passes by Lexington and separated to a halftime score of 29-18.

That 11 point lead would only shrink to 6 in the third period before more pressure from the Spartans began to overwhelm the Minutemen who continued to misplace passes and miss open shots.

That was compounded by an extraordinary second half by Richmond Junior point guard LenDarrius Pritchett who was left alone at the top of the key and dropped 4 on the Minutemen from 3-point range. The Spartans would go on to a 64-50 win.

The Minutemen were led in scoring by Senior Tyler Ellison who dropped 2 from 3-point land and was 2/2 from the foul line. Lexington is now 4-17 on the season.

The Spartans were led of course by Pritchett who put up a 30 point effort and was a perfect 4/4 from the line. Richmond is now 16-6 on the season and these teams will meet again Monday in Lexington for an early week match-up.