COLUMBIA, Mo. — Tall fescue is one of the most popular types of pasture grass in Missouri due to its potentially abundant yields.

Fescue can produce high yields that can be used for fall and winter grazing through proper management practices as well as timing the application of the fertilizer on the pasture. 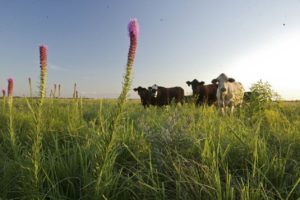 According to the University of Missouri Extension, fescue grows during spring and fall, but the fall crop is not as hearty as spring.

However, both seasons allow for longer periods of grazing, which is useful when forage stores are low.

Even though fall fescue is not as robust as the spring, the MU Extension indicates that the fall grass can withstand early frosts and even the winter storms.

Craig Roberts, a Forage Specialist with the University of Missouri Extension, encourages producers to think about fertilizer application now so there is a plan in place when August arrives.

If nitrogen fertilizer is laid too early in the season, then there is an increased chance of warm season weeds overtaking the field.

Another thing that producers need to be aware of is that adding fertilizer to fescue can increase the toxicity of the grass.

Roberts points out that while the toxins levels are lower during the summer, hotter weather can increase the amount of toxins within the fescue.

The MU Extension recommends varied application dates for different parts of Missouri to take advantage of annual fall rains. In the central portion of the state, it is recommended to apply fertilizer on August 15, northern Missouri is August 10 and the southern region should delay application until later in the month.

More information about fertilizer application on fescue fields is available on the University of Missouri Extension’s website.

Farm Production Expenditures Up in 2010