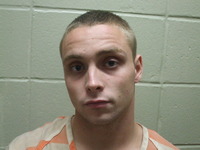 A Chillicothe man, Timothy Orr, 21, is charged with assault after his child was hospitalized with swelling and bleeding of the brain. He appeared in court on January 15th and waived his right to a formal arraignment and pleaded not guilty. The defense also made a motion for a change of venue which was granted. The case has now been transferred to DeKalb County and Orr will be in court for a plea or trial setting on February 14th at 9 a.m. before Judge Thomas Chapman.

One man dead after fatal accident in Cole County