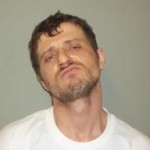 A Carrollton resident in a Ray County Jail is facing felony charges following his arrest by the Carrollton Police Department.

Online court records indicate William Randall Lackland, 31, is accused of 2nd degree burglary, and felony resisting arrest, plus one count of theft and stealing. He is also charged in a separate case. Lackland faces two counts of unlawful use of drug paraphernalia and resisting arrest. One case stems from events in early March and the second case from later that same month.

Both cases are scheduled for a hearing at 9 a.m. Wednesday.