PETTIS COUNTY, Mo. – Two Sedalia residents are spending the night in the Pettis County Jail, after being arrested for drug allegations Wednesday 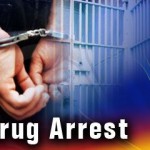 Meeting scheduled for Cameron Board of Aldermen