Adkison Guilty of Rape, Not Guilty of Sexual Assault 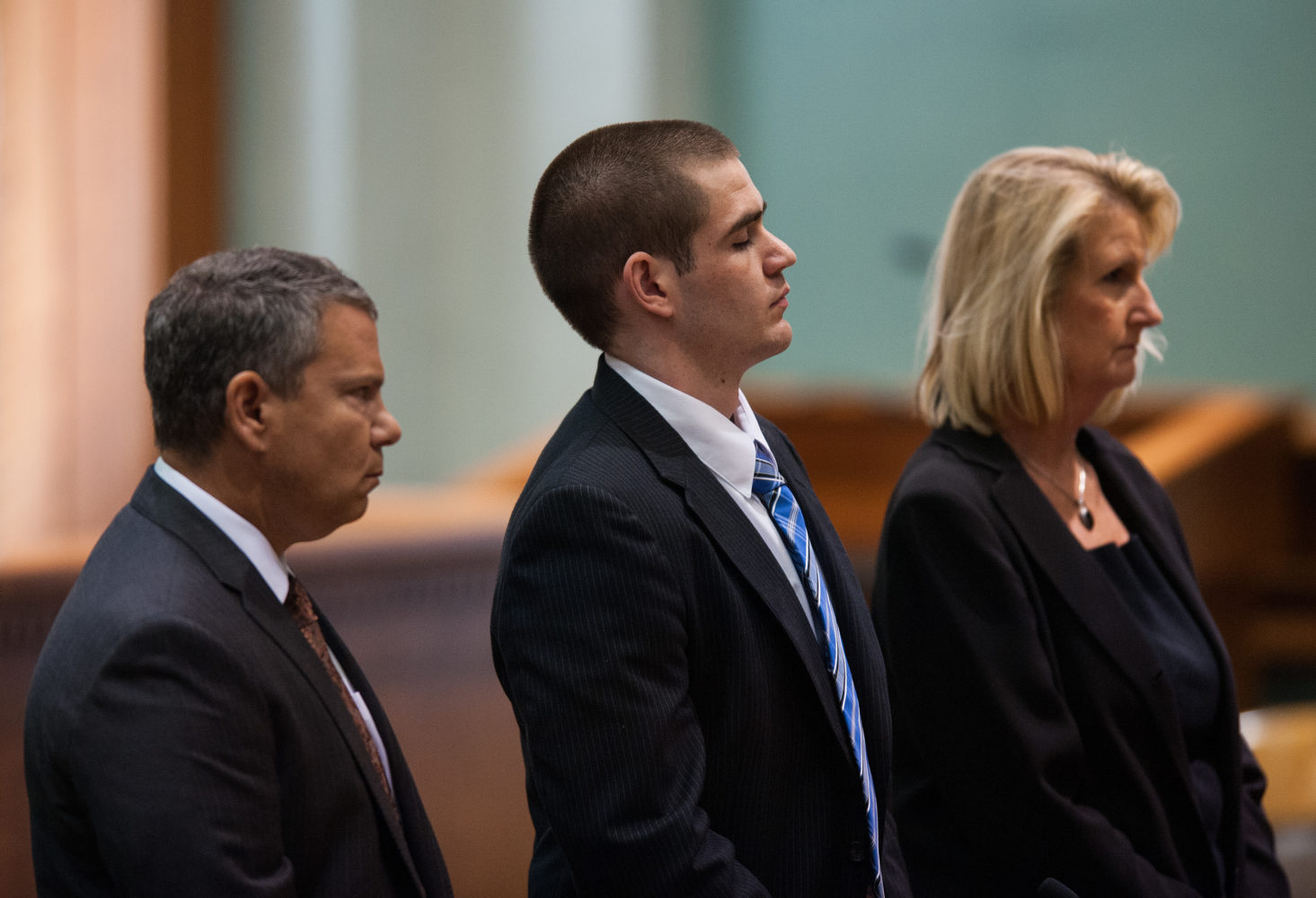 Some content contained in this article may not be suitable for all ages.

KMZU’s Justin Aldred attended the trial. He reports from the Boone County Courthouse: 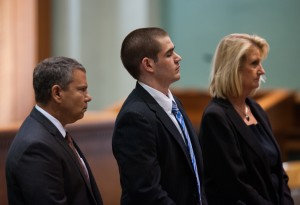 The defense stated they plan to appeal the case. Adkison’s defense attorneys claim the victim lied under oath and provided inconsistencies in her testimony.

The assistant prosecuting attorney says he is, “pleased with the jury.”

The jury found the defendant guilty on the “primary” charge, which is punishable in the state of Missouri by life imprisonment.

UPDATE: 8:00 P.M. – KMZU’s Justin Aldred reports that the jury, which is deliberating their final verdict after closing statements has stated that at this time, they cannot come to a unanimous decision.  After the statement, the jury moved back into deliberations.

UPDATE: 2:30 p.m.- KMZU’s Justin Aldred has called with another live update from the Boone County Courthouse:

Aldred stated the Prosecution as well as Defense have both made their closing statements and the jury is currently deliberating. Be sure to watch for updates as the trial goes on.

UPDATE: Day two of jury trial is underway in the case of State of Missouri vs. Brian Adksion. KMZU’s Justin Aldred reports from the courtroom: 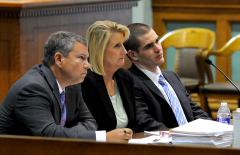 COLUMBIA, Mo.- At 9 a.m. Wednesday, July 15, 2015, the Boone County Court began jury selection in the case of the State of Missouri Vs. Brian James Adkison. Adkison has pleaded not guilty to charges of Forcible Rape in the First Degree and Sexual Assault.

In the State of Missouri, in order to find the accused guilty, the prosecution needs to prove sexual intercourse occurred between Adkison and his alleged victim through forcible compulsion, with physical force to overcome reasonable resistance. Although a jury will decide whether or not Brian Adkison is found guilty or not guilty, a Judge will decide his sentence.

Adkison is not required to testify in the case, while it’s up to the prosecution to convince the jury whether or not Adkison is guilty beyond a reasonable doubt. Potential witnesses involved in the situation include two University of Missouri medical students and a nurse from the University Hospital as well as members of the Columbia Police Department.

Only one witness was called to the stand at around 2:15 p.m., Brian Adkison’s alleged victim. According to the opening statements of both the prosecution and the defense, Adkison and the witness had an established relationship since the time the two of them went to high school together. According to testimony, that relationship lasted approximately 4 to 5 years until it was terminated by the witness. The two then had periodic, or sporadic, contact for the next several months, and at some points in time, engaged in consensual sex.

The prosecution stated that on May 3, 2013 the witness was studying for finals with friends at Panera Bread. The witness left the restaurant at 9:15 p.m. and allegedly went home to her two-story ground level residence, showered, played on her phone and then checked the locks before going to sleep. Allegedly the witness awoke to the silhouette of Brian James Adkison in her bedroom doorway. The witness stated that she immediately told Adkison he didn’t belong there, and to leave. The witness stated that Adkison told her “I just had to see you.” The witness told the prosecution she made it clear that she didn’t want Adkison in her home and spoke to him angrily.

At this time, she also claimed that Adkison had her phone and gave it to her turned off, telling her not to use it. The witness told prosecutors “I just knew he was in my house and was not supposed to be.” She later went on to state that he briefly put clothing over her face to keep her from yelling and grabbed her wrists. The witness told the court that she spoke with Adkison for around 45 minutes, and he stated he had been at bars all night and that “life is so screwed and nothing is going right.”

The witness told the court that she thought Adkison was mentally depressed, and that he would not physically let her leave. It was at that time, the witness told the prosecution that, “any time I did anything that wasn’t what he wanted he would grab me.”

The witness set a timer for 15 minutes and asked Adkison if he would actually leave after that amount of time, to which he allegedly replied “no probably not.” The witness then told the court that things turned violent with Adkison, who flipped her over onto her back while she struggled. The witness told Adkison to stop while attempting to choke and bite at him.

The witness then stated that Adkison ejaculated inside her; rolled off the bed, put his pants back on and got back in the spooning position. The witness noted that something about his demeanor changed and Adkison left the room and stated “I feel sick” repeatedly.

At this point, the witness told the court that she asked Adkison’s permission to use the bathroom and used the opportunity to move a pellet gun that has been located in the hallway to the shower.

Around 8:15 a.m. the witness called a female student leaving her a message to let her know she would not be joining her to study that morning. The witness then watched Adkison leave the residence in what was described as a “red hatchback.”

After the accused left, the witness grabbed a skinning knife for protection, and drove to urgent care. The witness expressed that she did not want to go to University Hospital because, as a med student, she both went to school and worked at the institution and, “had gone through an awful lot and didn’t want to explain myself to anybody, or have them feel bad for me.” Ultimately the witness ended up at University Hospital despite her concerns, where she underwent a rape kit and a nurse talked through her story and took photos of her arms, wrists and face.

The photos taken by the nurse were then shown to the jury, and the prosecution played a recording of a phone conversation between the witness and Adkison. The witness made the call at the behest of law enforcement in order to record Adkison confirming the witness’s story.

During the duration of the phone call, which played in court before the Jury, Adkison told the witness, “I wished you liked me half as much as I like you,” “I’m bulletproof,” “Why don’t you believe me when I say I want to be with you forever,” and statements such as, “I’ve never tried to hurt you,” and “I would never lay a hand on you with the intention of hurting you.” Other comments from the accused included, “I’ve been very very, very, very, bad to you,” and “I’ve done some awful things to you, it was because I couldn’t have you, I couldn’t do anything without you.”

After a brief recess the defense questioned the same witness. The defense noted that the witness and Adkison had terminated their relationship, possibly after pressure from the witness’s parents, but the two remained in contact through phone calls, text and internet messaging.

The defense also pointed out that Adkison helped build the witnesses bed, and in 2013, gave her a dresser. Adkison had also reportedly spent the night at the witness’s house, where they had what the witness described in court as, “begrudgingly consensual sex,” because “he wasn’t going to let me sleep till he got what he wanted.” The defense noted that during this incident the witness didn’t yell, didn’t leave, nor make a police report.

The defense pointed out irregularities in the testimony and previous statements made by the witness to officers of the law, in which the witness alleged she and Brian Adkison had struggled over a can of mace at some point during the attack.

The witness was also unable to remember if she opened or closed a door leading outside from the kitchen while Adkison was in her home. The defense showed court documents dating back to December of 2014, where the witness stated she had a cellphone tucked in her waistband while in the kitchen with Adkison, contrary to statements made in the current trial.

The witness also allegedly never previously mentioned kissing the accused during the time of the attack, and told the court that any kissing would have been to calm him down. The defense then noted that the witness’s cell phone was in her possession when she used it to set the 15 minute timer mentioned earlier. 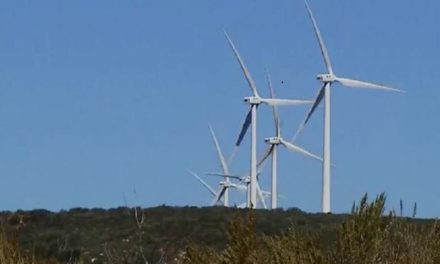 Roll Over Accident in Pettis County