Voting Coming to A Close in USFRA Contest 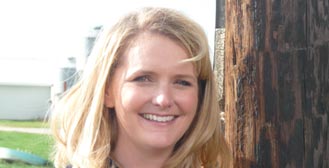 Chris Chinn of Clarence, Mo is one of nine finalists in the US Farmers And Ranchers Alliance “Faces of Farming and Ranching National Spokesperson Contest.”

A farmer from the Show Me State has made it to the final round in a nationwide contest.

Chris Chinn and her husband Kevin are fifth generation family farmers who work alongside his parents and brother near Clarence, Missouri.  It was just a few months ago when she came across the “Faces of Farming and Ranching” national spokesperson contest.

“I was on the website one day just kind of looking at the US Farmers and Ranchers Alliance web page and I saw they were starting this contest and I decided if I don’t apply who else will,” Chinn explains.  “I felt like our family farm was representative of the majority of family farms out here today, we have 3 generations working on our family farm  and I just felt like that was the story not always being told by the media.”

Chinn is one of nine selected from an initial pool of around two-hundred candidates.  If she gains a large percentage of the votes, she’ll have a nationwide platform to tell her farm story and reach audiences not typically connected to agriculture.

“If chosen they will help me get into audiences that are more difficult for farmers to reach out to.  I would have some media interviews and they would help me just reach the urban population so that I can help them understand agriculture and we can begin to have some meaningful conversations about how food is produced.”

The top three vote-getter’s will represent the Ag industry and help encourage dialogue around food production questions.  Voting comes to a close this Saturday (Dec. 15).  The winners will be announced in January.  To see a short video of the final candidates and cast your vote, visit the USFRA website.

Consumers and other farmers and ranchers around the country are being asked to vote online for their favorite spokesperson.