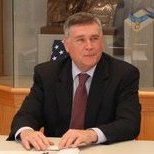 LEXINGTON, Mo. (Wentworth Press Release)- Wentworth Military Academy and College announces the retirement of Athletic Director and Head Men’s Basketball Coach Tom Hughes.  Since 1975, Coach Hughes has been coaching at the high school, college, or professional level and after much thought over the last year has decided that now is the time to step away.

As a Wentworth Coach’s Hall of Fame member, his list of accomplishments is long. He has had the honor of coaching three NJCAA All-American players and four NHCAA Region 16 Player of the Year WMA athletes. While at Kansas Wesleyan University, he coached women’s basketball (‘95-’96) and volleyball (‘97) as the NSCAA National Champions.  He was named the NSCAA (now USCAA) National Coach of the Year for women’s basketball (’95) and volleyball (’96). Coach Hughes’ first NJCAA All-American player and Wentworth Athletic Hall of Fame member Bo Walden (’91) said, “Coach Hughes helped make my basketball career a success. I am thankful for the many life lessons that Coach taught me. He made me feel comfortable and appreciated as a young man. He helped me become the first All-American in Wentworth history; he was there for my first 50 point game and my first end game dunk. His dedication to the players at Wentworth impacted not only me, but many others. His mentorship gave each of us the skills necessary to be successful in life; and for this, I will be forever grateful.”

Hughes began his Wentworth career as coach for the men’s basketball program at Wentworth in 1985.  Coach Hughes remembered, “For nine years we battled with the best.  DT Love (career scoring leader at Wentworth), Todd McGowan, Mike Heyer, Randy Florence and the rest of the 85-87 teams set the bench mark for who we wanted to be as a basketball program.  And the players that followed like Bernard Nelson, Bo Walden, Boo Ray, and Anteco Cross followed their lead.”  DT Love (’88) stated, “Coach is single-handedly responsible for where I am today. He had faith in a 17 year old kid from Memphis, Tenn. Coach not only offered me an opportunity, but he was always there to assist me in succeeding! I have had the honor of coaching some young men in my spare time and I use a lot of what I learned from Coach Hughes. I make it enjoyable and an experience they will always remember; just as my experience was with Coach and my Wentworth family!”

Randy Florence (’88) former player and assistant coach for Hughes shared, “Coach Hughes has been like a father figure to me going back to 1986-87 when I first started playing basketball for him at Wentworth. In all my years of coaching I have called him many times for advice, and then had the privilege of coming back and coaching with him at Wentworth. His loyalty and commitment to the program has been tremendous and the foundation has been laid for the next person; although it is going to be very hard to fill his shoes.”

Six years ago, Coach Hughes was contacted about coming back to Wentworth and re-starting the College Athletic Programs. Starting the Men’s Basketball program from scratch, they became competitive almost immediately.  In the 2012-13 season, Andre Scott and Jordan Davis helped lead the team to a record setting 19-9 record, a NJCAA Top 20 ranking, and a regular season Region 16 Co-Championship.  And, like the 1985-87 teams, they set the standard for the teams that followed.

Serving as both Athletic Director and Men’s Basketball Coach, Coach Hughes strived to build a program to be proud of.  With the help of all the coaches who worked with him, they were able to put teams on the field, on the court, and on the mat, and on the track that garnered Wentworth numerous state, regional and national honors.

Another of Coach Hughes’ players from the 1991-93 teams, Anteco Cross (’93) weighed in on Coach Hughes’ retirement, echoing much of what other players have mentioned saying, “Coach has done so much for me; he is more than just a coach – he helped raise me. He knows just what to say to motivate his players. It is amazing how good he is at what he does and how he has taken the basketball program at Wentworth to where it is today. Coach changed my life and I would not be where I am without him and my experience at Wentworth.” All of the former players stated they will miss Coach and wish him the best in his retirement.

Wentworth’s President and Superintendent COL Michael Lierman stated, “Coach Tom Hughes is a man who has dedicated his life to coaching and teaching. He has coached at several levels and provided guidance to young men and women by not only coaching the sport, but teaching them good sportsmanship and life skills. He has spent many years sharing his motivational knowledge and providing guidance to many through time. Tom has been a part of the Wentworth family for 15 years and has coached and mentored many cadets and students. We are very happy that Tom has been a part of our staff and that we have had the opportunity to work with him through the years. I very much appreciate all he has done to develop our athletic program and help our cadets and students be successful. He will always be a friend and is always welcome at the Academy. I wish him the very best as he retires and gets to spend time with family and friends. ‘Thank you for your service Coach!’”

Coach Hughes added, “I want to thank Mike Lierman for his leadership, his commitment to Wentworth, and his friendship.  His friendship and his mentorship have helped me tremendously during the past six years.  To some tremendous Athletic Directors: Jody Thompson (Labette), Dick Gwinn (Wentworth) and Jerry Jones (Kansas Wesleyan),  a tip of the hat to you for your help and guidance.  I also had the privilege of working with some of the best assistant coaches that I could have hoped for – Randy Florence, Mike Long, Jay Allen, Ed Kozol, Jennifer Head, and Bob Murray.  You were there to help guide and mentor the young people we worked with.  Thank you!  Finally, to all the athletes who helped me live my coaching dream; it would have never happened without you!  From the high school athletes (Marquette, Melvern, Southeast and Atkinson County) to the college athletes (Labette, KWU, and Wentworth) to my USBL and IBA guys – Thank you!  It was a tremendous ride, and I wouldn’t have traded it for anything.”

The Indians Cut Down the Pirates