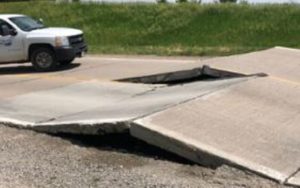 UPDATE: 10:43 – An area roadway had to be shut down Monday due to a pavement blow-up.

Work had been scheduled for Tuesday on Route 59 west of Savannah, however, the roadway from Route CC to U.S. Route 71 will now remain closed through the morning of Friday, June 12.

A blow-up usually occurs as temperatures warm, and there is no available room for expansion of the slabs. This causes the slabs to rise at the joints, or cracks.

SAVANNAH, MO – The state Transportation Department says Route 59, west of Savannah had to be closed due to a pavement blow-up.

According to MODOT, work will be ongoing Tuesday, until the road is repaired.

A blow-up is described as usually occurring with warming temperatures, and there is no available room for pavement slab expansion. This causes the slabs to rise at the joints, or cracks.

Flags to fly at half-staff in Missouri Wednesday